My friend, Brian Hill, stopped in Taipei and we met up. I haven’t seen him in ten years, since we were both in Beijing. He is originally from Los Angeles and lives there now as well. He has always been a really cool individual. He works for Princess Cruises and came out to their offices in Taiwan to help work on an ad campaign. We walked and talked around the Shida night market (near my university), finally decided on a jiaozi restaurant. The food was great, especially their fried kimchi jiaozi. Very delicious. 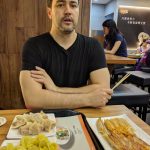 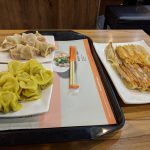 In addition to my friend stopping in town, I also captured a picture of my local sausage street vendor, although these guys have a little shop. Called 黃家香腸, or Yellow House Sausages, these are extremely tasty. On google reviews, they have a 4.2 rating and are rather popular in the city. Every time I go there, I always have to wait in line. The workers are very friendly and ready for conversation (if the line is not too busy). As a bonus, they are really close to my apartment. 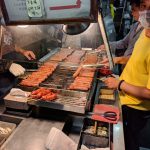 I have long been a fan of Korean food. Now, as I try to increase my culinary repertoire, it is only natural that I go to that cuisine style that I have so joyfully embraced. For my first dish, I picked a simple one that I learned about through my Youtube subscription here. Maangchi is a Korean cook who has excellent skills and does a great job of teaching it. Her website is here. 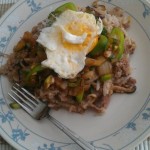 So, I used her recipe for Kongnamulbap. To put it simply, kongnamul is soybean sprouts and bap is rice. To make this, I used rice, soybean sprouts, ground beef, a pepper of choice, shiitake mushrooms, enoki mushrooms, onions, cucumber, green onion, soy sauce and sesame oil. I then put a fried egg on top.

This was a great dish. Simple enough for me and I made so much that my friend Anna and I ate it for lunch while having left-overs for two or three meals. The only problem I had was that rice burnt to the bottom of the pot. Will have to work on that.

My sister-in-law, Marianne, is one of my favorite people to talk to, especially about food. I like my other ones as well, but she is the one I have had the longest. More importantly, she lives the closest to me. This means that I can go and mooch off her when she allows. This past Friday she was without my brother as he was working a double at the Firehouse. I successfully ingrated myself to her when she said she wanted to cook a little Indian food. She has raved about it before and my ears perked up like Georgia (her German Shepard) when I heard Indian food. I even volunteered to help her collect the fixings. So off to the store leaving my two nephews to watch over the home front.

That night we had 3 dishes – Lamb Korma, Chicken Tikka, a Vegetarian Biryani and Naan bread. I ate till I burst. It was amazing. I could almost hear the Bollywood music in the background and feel Aishwarya Rai giving me a backrub. Awesome. I know, I know, Aishwarya Rai is from the south and these were all dishes from the north brought primarily in by the Mughals. Fine, but allow me to wallow in my own fantasy, ok. Yes, I know she is married. It is only a backrub. 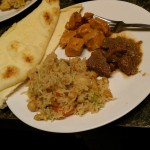 Back to the food – paradise. The Lamb held only a hint of spiciness as neither my sister-in-law or I wanted the heat to overpower, but still delicious. The Tikka came out succulent. The Biryani was very good as well. The naan was simply divine – even though it was the only product that she didn’t make. Walmart. Who knew? Still, it came through perfectly and was a great way to eat the dishes. I don’t know how authentic it truly was, but damn it was good. I had a hard time deciding which was my favorite so I kept eating till I could make up my mind.

I hope to make many a long journey (ok, like 3 miles) to eat more of her great food. Wink, wink. Was that perhaps not so subtle? I did mention that I like to mooch. :-)

P.S. – The above picture is of Aishwarya Rai. A fine looking woman. It was only a backrub!