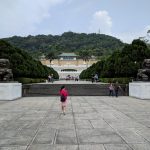 This week was Qingming Jie, or Tomb Sweeping Day, in Taiwan, which is a National Holiday. For this day (April 4th), Masako was able to get off work, so we decided to visit the Palace Museum. When the Guomindang retreated to Taiwan in 1949, they evacuated with them around 80% of the artifacts in the Forbidden City. This is one reason why when you visit the Forbidden City, there is not much left inside the buildings. Anyway, it was a beautiful day and I was happy to spend time with one of my favorite people (the last picture is of her in the park next to the museum). 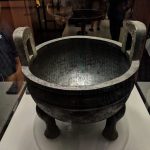 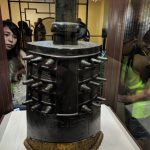 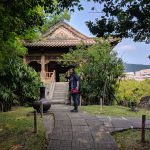 Masako and I both love old stuff, so we really loved the Shang & Zhou dynasty bronzes. I love pots and she loves calligraphy, so there was something for everyone. They had several memorials to the Qing emperors there and their responses to their administrators were at times hilarious. One of our favorites was the response of a simple 不, or “no” to a really long memorial. 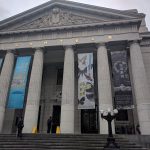 Two days later (April 6th), we visited the National Museum of Taiwan. This museum was really interesting as well. It had exhibits of the native flora and fauna of Taiwan. We skipped the insect exhibit because of my phobia. I liked the displays about Taiwan’s indigenous population. First referred to in Qing histories as Eastern Barbarians, they are a hardy people forced into the interior by successive attempts to ‘civilize’ them by first the Qing government, then the Japanese and finally the Guomindang. Taiwan aborigines are one of the Austronesian peoples, like Malaysia, Micronesia, and Polynesia. There are about ½ a million still around.

Next door and after lunch, we visited the Museum of Banking and Dinosaurs, which was 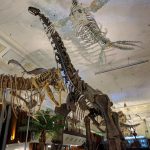 next to the National Museum and administered by them. The Banking Museum was really interesting, seeing the development of banking in Taiwan. Walking around a wall and seeing the dinosaurs was really a wow moment for both of us. While the majority of the bones are replicas, the atmosphere with the displays and the kids running around excited helped us capture a little bit of that old fashioned feelings of awe. Sometimes I feel too cynical and old. Not then.