I ordered an Ancestry DNA test on cyber Monday last year and was finally able to do it after I got the test from Jason in Hawaii. I sent it off from there and almost exactly a month later, I have the results. Here it is:

I thought the Scotch/Irish and English were probably spot on. The western European (Germany & France) is pretty spot on as well. The Iberian, southern European, Scandinavian, and even <1% Jewish were all within expectations. The one that really threw me was the Caucasus bit. 5% is a not inconsequential amount of my DNA. When you click on, it states that this DNA can be found in Armenia, Azerbaijan, Georgia, Iran, Iraq, Syria, and Turkey. Trace amounts can be found in Bulgaria, Jordan, Greece, Italy, Kuwait, Palestine, Romania, and Turkmenistan. I think this is from my father’s side, as a 2nd cousin of mine had 2% Caucasus. My father’s family tree has been extensively done, so I have no idea how this or when or where this DNA entered in.

Update: I sent my DNA results to MyHeritage and they had radically different results. Great Britain (Ancestry) went from 36% to MyHeritage’s 1.3%. I think Northern and Western Europe also must carry in some English DNA, because my father’s side is almost all Yankee New Englanders, who were predominantly English. Still, MyHeritage had no Caucasus, so I don’t know what to say. Here is their results: 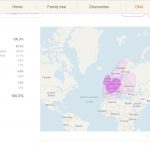