Last Saturday, I went on a horseback riding excursion with three of my friends – Tammy, Bret, and Bao. We rode a bus out to the nearby countryside. There were several activities that we could have participated in, but we were there for the horses. This was the second time I was on a horse. The first time was in Mongolia in 2007. I don’t know if I can say that I enjoyed then. I also cannot say that I enjoyed it this time either.

Luckily, my friends made it enjoyable even if the riding was not. We had disputes with the owners over money and guides. One of the guides kept asking me for money. Silly man. I don’t give out money to just anyone. The other guide leading Bret and Tammy was drunk, even though it was only about 1 pm. He at least was on a horse. Bao and I were led by our guide, who was on foot. Several things irritated Bao about this. First, she was an accomplished rider back in Germany and felt that the guide was unnecessary. Second, she also felt that the horses had been taken care of indifferently. Third, she had to listen to me talk the entire time.

I talk a lot when I am nervous and/or in socially awkward situations. Bao was very patient with me and just let me blabber. I was very nervous and afraid. Not because of the horse, but because I have a fear of heights. A deathly fear. A fear that emerges even when I step on a chair. Ok, horses kind of freak me out too. But, I will not be kept down by my fears. I have plans to bungee jump and skydive one day. A small step though it may seem to someone else, I got on the beasty’s back and rode a little bit. Then I got off and walked, because God gave me feet for a reason. My friends were able to gallop about for a while.

All in all, it was a pleasant experience. Here are some pictures: 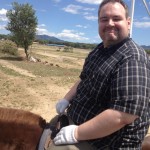 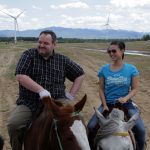 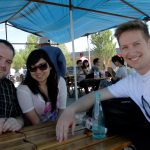 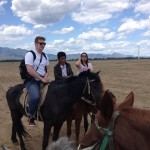