So, the classes that Jumped into are much harder than the Elementary level courses. The HSK class has proven to be one that will kick my butt repeatedly. As one of my classmates stated, he felt like he was the worst in the class. My answer to him was that that is impossible since I am in the class and I know I am much worse in Chinese than him. So, HSK and Chinese Culture are proving to be the most difficult so far. I know what the teacher is talking about in Chinese Culture, but I sometimes don’t understand what she is saying. History is my thing, you know. HSK class I maybe understand 30 percent.

One of the major obstacles in studying is my own fool self. I have not been studying and when I do the homework, it is either incomplete or for the wrong lesson. I had a serious self-criticism session this week and resolved to do better. I must, because if I don’t, I am only wasting my time and money. Both are unacceptable.

I would like to mention one thing up front first – I love Chinese food. I love its depth and complexity, something difficult to find in the typical Americanized take-out joints so ubiquitous in every town in the States. Chinese food, with its eight major cuisines and many smaller ones, has been one of the great joys of my life. When in the US, I completely miss it. In China, however, I start to miss other things. There are some great restaurants in Beijing catering to many of those needs. This review is of one of them – Baba Khan, a small Pakistani restaurant in Wudaokou. In fact, there are two locations, the main one in Chaoyang and the smaller, newer branch in Wudaokou. If you go to the U-Center on Chengfu Lu, travel south for about 5 minutes, it is on your right in a small strip mall next to a motel and a massage place.

When I first started to live in Wudaokou, I would often get my South Asian food fix at Ganges Restaurant on the 6th floor of the U-Center. Now, Ganges is a good restaurant, with the food being good. Baba Khan opened about a year and a half ago and it quickly blew Ganges out of the water in two of my favorite categories – price and taste. It tastes better and is cheaper, which, in truth, might also have an effect on the taste. Baba Khan’s dishes on their dinner menu generally run anywhere between 10-20 RMB cheaper than the competition. Plus, they have hummus, that gift to man straight from deity. To make matters even better, they run a 55 RMB all you can eat lunch buffet. Every single person I have taken there (less 2 Chinese friends – weird, right) has loved the food. Here is a picture of my lunch from last week, with naan bread, tandoori chicken, rice, and three kinds of curry: 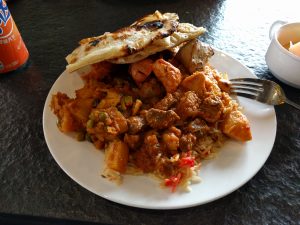 My first week of school was one of frustration and anxiety. The frustration was due to the registering process. I spent a great deal of time in great many queues. I have no doubt that my school, Beijing Language and Culture University, endeavored to streamline the process with helpers directing hallway traffic and answering questions. Large placards detailed every paper and other items needed for each line. I am just that guy. You know that guy – the one who seems incapable of standing in line. No because I am incapable of reading the instructions, just incapable of following them.

In addition to standing in line, I also had a 2-3 minute conversation with a teacher that placed me in the Upper Elementary level. She wanted to place me in the Lower Elementary (the lowest), but I talked her out of this. I was really nervous during the conversation and stressed. I spent about a week in this level and on Friday, I changed to Lower Intermediate. I was extremely nervous about this switch, even though I found the Elementary class to be of little challenge. I understand literally just about everything the teacher said.

Today, I had my first class from this level. It was 中国文化 (Chinese Culture). The teacher spoke pretty quickly, but I understood at lease 75%, if not more. It was an interesting class. It was partly history and a great deal of detail on China’s minorities. I really enjoyed this class and look forward to more of it. Tomorrow, I am having an HSK class (teaching the Standard Chinese Language Test) and a regular class for the level I am now in. I still remain nervous because I, as always, doubt myself. The nervousness my also be because I have to go to the hospital tomorrow for my required physical exam.

I will definitely include an update of how the classes go tomorrow.

Time again to remember not just the day, but the people. This song still tugs at the heart and brings out the tears. God bless them and their families. 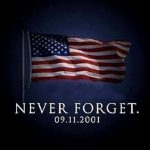 I cannot really express how disappointed I was with the football game on Saturday. As many commentators online noted, the Tigers have not seen any progression from last year. The quarterback situation remains tenuous and a reliance on one or two running backs, no matter how good, is unsustainable. In addition, our defense seems to have seriously digressed with the loss of last year’s play makers to the NFL. I have long been steadfast in my support for Les Miles, countering arguments of his faults with his many advantages. Reluctantly, I am joining the bandwagon to see my beloved Tigers go in a new direction. I now believe that this should be his last year at LSU.