They say that earlier generations displayed the moral fiber and steely nerves that our present dissolute generation lacks in spades. Looking around at current groups of youth, I can hardly put up an adequate defense against such beliefs. Awash in technological addictions and moral subjectivity, it is a wonder the barbarians at the gate just don’t knock on the door. We would surely let them in, if only for the short amusements our sensory overloaded attention spans could revel in.

That is not to say that this steely core has been entirely expunged. Even today, we have our Marcus Letrell, Michael Murphy, and so many others. Maybe it is even harder for these men and women, as we have sanitized the war and violence so far away from out of our lives. Dominated by the grind of dull work (if we are lucky) and frequent trips to the mall to expand our already burgeoning waistlines, our nation hardly glances up at headlines whispering such as 2 killed in Afghanistan today. It has so much competition with Poll Numbers, Debate Commentaries and the latest scandal by some over-tanned unwed mother in Jersey.

Perhaps this explains why those in the past hold such an interest for me. That I buy into the argument of this generation’s moral decay. I myself can not measure up to the heroes of my day, so those of the past are god-like to me in their superiority. I understand that they were normal men, with all the foibles and failings that come with that. But, damn those were MEN.

The reason for this inward analysis of myself as representative of a fallen modern world is the passing of Command Sgt. Maj. Basil L. Plumley (Ret.) at the age of 92. A veteran of three of America’s wars, he leaves behind a daughter, a grand-daughter and 2 great-grandchildren. My knowledge of this man is limited to Wikipedia, the movie We Were Soldiers and several obituaries on the web. I do not know the inner soul of this man – his strengths or weaknesses. I only know he was mighty, as are all others who guard the sheep.

This weeks’ events in Louisiana football were bittersweet for me – LSU with its first loss and the Saints with their first win. It really stinks losing to Florida, although it will be much worse losing to those “people” two states over. I really want to gloat to Mr. Cy (my brother’s ex-father-in-law) on Facebook. He is always posting about those menstruating pachyderms. Other than this issue, I have always had a great deal of respect for him. I really want to upset their national ambitions. I would like a SEC team to win the National Championship again, consolidating our football superiority on the rest of the nation, but not Alabama. Saban is the devil, to bring in a Water Boy paraphrase.

For the Saints, it was a great weekend because we finally finally finally won. They had been playing tight with the rest of their opponents but just could not get the W. I have to admit that the defense backs suck more than I can even describe in words. In the 3rd quarter, they forced me to turn off the game and I didn’t even see the big finish. Rivers (Charger’s QB) was dropping the long ball into his receivers hands all night. Freakin’ depressing. Now, we have that behind us and we can start playing with more focus. Another good milestone for the night was Drew Bree’s passing of Johnny Unitas for the TD streak record. Go Drew!

Perhaps the most surprising team to set the chattering agog in Louisiana was the LA Tech Bulldogs. Normally, these guys are not even on my radar except for the fact Tech is my favorite cousin’s Alma mater. He really likes them. Well, he posted an interesting story on Facebook that I will link here: http://sports.yahoo.com/news/ncaaf–unconventional-attack–la–tech-runs-high-flying-offense-through-its-center–not-qb.html. I, along with a great many other fans, wish we had this offense. Damn straight.

On a positive non-football note, I got to hang out with the Moak boys for some Conference watching. It was uplifting as always. Just have to see if I can actually incorporate some of it into my life. No so easy all the time. :-(

I was invited to this restaurant to meet up with some friends that I had come to know through our study abroad trip to Tianjin in 2009. I keep in touch rather regularly with Lisa using Gchat, but I had not seen or talked to Quincy since that trip. The setting for our reunion  was a delightful place up near Sugarhouse at 21st South and 21st East. The owner knew Lisa since she was a regular visitor to this place.

We ordered the hotpot (火锅) without spicy, thus avoiding my lifelong war with 花椒*, or Sichuan peppercorns. We had both chicken and beef with assorted vegetables and tofu. I asked the owner if she had any 木耳, literally woodears or black tree fungus. She did not but did recommend some tasty shiitake (香菇) mushrooms.

When we received the bill, I was quite surprised to note that the experience only cost $19 for each of us. Lisa stated that the more people there are, the less the bill for each person. This so reminded me of China. All in all, this was a great restaurant where I was able to enjoy delicious food and practice my very poor Chinese.

*I do not hate huajiao but only the frequency that it is used, especially in Sichuan. Having lived in Chengdu for a year, I was inundated with the stuff. While most of my friends love it, I never quite caught the bug. I do like it in small portions, though.

This past week has been an eventful one. First, I finished writing a very rough draft of the introduction to my thesis that my Advisor praised a little. We discussed where I should be headed and she gave me quite a few insights that I can use in writing my thesis body. Luckily, quite a bit of it is already there because I did a great deal of it before my mental crap out in December 2010. I feel way more confident this time around than last time. I still have to control my impulses for procrastination and such, but I have a much better handle on how this is all going down.

I started to wet shave with a safety razor. I do not have the courage to step up to a straight razor. I started out with those cheap Bics when I was a teenager that cut my face to ribbons. I decided to use the Mach 3 when it first appeared on the market. I used that for several years until I became tired of spending so much on the blades. I started using my father’s favorite – disposable Gillette’s from Winn Dixie. Not a bad choice but they cut a little as well. It got to the point where I either didn’t shave for a week because I hated shaving or shaved because I really dislike facial hair. The war got a little hairy sometimes, if you’ll forgive the pun. I decided to try something different. I bought a Merkur straight razor and a shaving brush with cake soap. All I can say is why did it take me this long to find you. It has given me the closest shave with the least irritation than anything I have ever used before. *Update* My Merkur razor unexpectedly came apart, but the merchant that I purchased it from is providing a replacement at no additional cost. Very nice.

In addition, I went to get a new phone. Actually, I went to the Sears Auto-center to put new tires on my car and change the oil. While waiting, I went to the nearby AT&T store to look at their selection of Samsung Galaxy 3IIIs. The price was a little too much and I was easily talked into buying a HTC One X. I had an HTC Inspire, but had had significant issues with it – mostly call reception and battery life. My brothers said that it made me sound muffled and low, while the new phone was crystal. So far, I am loving my new phone.

Speaking of something new, I also gained a new great-nephew. Elijah Joseph Sibley was born the 25th of September 2012, weighing 8 lbs and measuring 22 inches. While this is not my first time as a great-uncle, he is pretty damn cute, if I may say so. It stinks that I am so far away and will not be able to meet him until December. Here are one or two pictures. 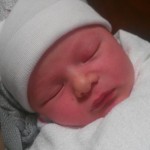 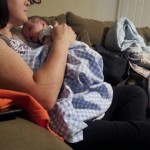 I also had a Korean chapter test in which I intially felt alright about but was only able to secure a 86% score. There was not a deep fundamental flaw, mostly nicks taken off here and there. This just means that I will have to study harder. Doh!

Hmm, I also met with some old friends for lunch at the Hunan Gardens Restaurant for hotpot. I had not had hotpot since I came home from China in 2010. It was awesome. I made tentative plans for a later reunion with these same friends and others at the same place. Thank you Lisa for taking me there and Quincy for joining us. It was great meeting with you ladies after such a long time. Quincy also invited us to her single’s ward meeting and an afterward break the fast at her house in Park City. The meeting was pretty good and it felt great since I had not been to church since arriving. I know, I know – I’m a slacker. The break the fast meeting was excellent as well. I would like to thank Quincy’s parents for opening their home to me. Next week, I am going down to Cedar Hills (north of Provo) to go to church with the Moak boys and also watch football. Geaux Tigers!